Tulip The Servant of Fate wip

Tulip The Servant of Fate wip

Name: Tulip
Species: Human
Gender: Male
Age: 24
Appearance: A tanned man who generally has a goofy grin on his face. He has brown hair and eyes. He generally has a brown cloak over his person.
Personality: He is absolutely loyal to Fate. He prefers to avoid violence. Generally nice (except when he steals your stuff)
History: Tulip was abandoned by his parents at Ioda at the age of 13 days. He was found by "Fate" (A dafurai) and he help tulip. tulip never actually saw "fate" Fate commanded animals to take care of Tulip. Tulip serves Fate by giving Fate anything he wants, traveling all over the world to retrieve any objects; from a sword to a kings throne. Tulip has no friends or enemies (or so he thinks!).
Abilities and Skills: Having very high levels of divine magic Tulip is almost unstoppable by anyone but the most skilled. He has become quite adept at using his great power. He follows orders with a devotion that's almost unhuman. Tulips not big on stealth, but when he wants to he can be quite stealthy.
Weaknesses: Tulip has a hard time thinking for himself. If you kill "Fate" he is next to worthless. Tulip is not that strong as he uses magic for everything. 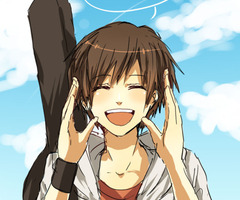