Appearance: Much like the City he Governs, his appearance is a shining example of brilliance. Unlike the many other Humans who have hard features and scars littering their body due to the inhospitable lands around Draconis, Tenebris has no visible imperfections, he’d appear to have been groomed for his current role, although clearly not the case none the less. He has clear appealing features, his silvery-blonde hair reflects the light and gives him an almost ethereal other worldly like appearance which accompanies his eerie vibrant blue sapphire eyes which seems to pierce into your very being.

Apart from his high cheekbones and well defined jaw line, the rest of his appearance comes from his general demeanour, forever maintaining his elegance and regal bearings. Apart from when within the confines of his private Quarters he is forever mainly seen in a formal stance, standing domineeringly with an upright posture born out of purpose looking as if more comfortable on a militaristic parade. Although usually wearing humble attire, during formal ceremonies and events he is known to wear a ceremonial garb out of armour which usually depicts Draconic imagery in honour to the Dragon who allowed the Settlers to thrive and develop within the land. 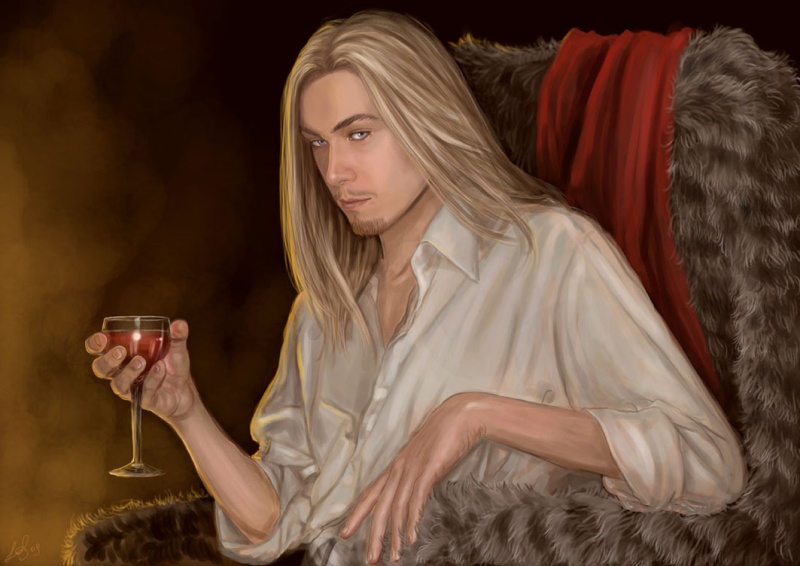 Personality: Charismatic and cunning, Tenebris prides himself on his wit and impeccable charm. Despite being noted as distant and reserved he is known to have the “common touch”, being able to speak to anyone from any walk of life or that matter even race and talk to them as equals. Calculated, he is perfect for his job usually losing himself into the Political sphere of Draconis although behind the harsh and stolid appearance he is a kind soul doing what he can for his own philosophy of the “Greater good”, while reserved with a close circle of friends, those what have managed to get through his cold exterior know that the young Viscount if a spirited man who strives to see the best in all people and races from all walks of life, often deeply effected upon seeing those less fortunate. Being one of the youngest Viscounts to come into power over the City, his political savvy and ambition knows little bounds, most relaxed and fluid in a deep debate or a gathering Tenebris is a great orator and man of words. Coming from a commoner background, the Viscount often appears to be aloof and reserved however this is a facade what he has learnt to maintain due to his role within Draconis, well aware that many specially those within the old blooded aristocracy of the City would see him stripped and removed from office if he showed open weakness within the Senate.

History: Born into a minor aspiring Merchant within Draconis, he was the youngest of three Sons who were destined by fate to follow in their fathers footsteps and continue their forebears legacy and existence. Named Solomon Ashford at birth the District which Tenebris grew up in within the City of Draconis was known for its corruption and domination by tainted officials, despite the lack of physical danger the small area was plagued by tyranny of the rich and powerful, many times did Tenebris’s mere middle class business be thwarted and crippled by larger “Less-Honest” entrepreneurs. Being sickened and disillusioned by consumerism and the pursuit for business, he began a open public campaign against corruption, his sheer intelligence outsmarting those officials who didn’t understand that a mere levy and accountant could hold such influence.

Being removed from the scene and due to attracting unwanted attention for his family and their business, he served a period within the City Watch and Guard in a different district of the City at the age of Seventeen, at the age of Twenty Five he returned to his original district and used his contacts he gained from his service in the military to acquire support from elite officials, and as well as his family’s previous connections as they've started to thrive in recent years he stood for his first chance as a political representative for his district in the greater republic of Draconis. His Political career has been the foundation for the City to strive towards giving the Citizens a greater sense of protection and the removal of corruption, granting greater personal freedom and more rights to those outside of upper society, due to his ambition and his savvy driven by his beliefs for a better world, his political strive to consolidate his power has earned him the rank of Viscount at the age of only Twenty Nine, one of the youngest to be named the ruler for Draconis, and thus he gained sovereignty to forever be known as Tenebris Augustus Wyrmfire.

One of the many feats what added to his popularity in his running's to become a member of the Senate was due to his accomplishments while serving within the City Watch, while proving to be a capable and honourable man he would later be hailed as a Hero of Draconis for slaying a Nightfury. While stories tell of him riding out alone to fight the beast, very few outside Tenebris's closest companions know the full extent of the truth. Tenebris's father before he wed his mother once fell in love with a Dragon while on his journey's as a traveling merchant and sired a child, a half breed and Tenebris's eldest sister to whom Tenebris himself was oblivious ever existed. Long after Tenebris's own mother died, himself along with his two brothers were asked on his fathers deathbed to bury him not in the district cemetery with his Wife but to bring his body out into the wilderness to a Cave, there they found a large burial mound engraved with a simple stone, which read "My dearest love, while we cannot be together in this life I pray you wait for me in the next".

As they opened up the mound to place their father within, they found the remains of a Nightfury, it was at this moment, the three brothers heard a cry of dismay and turned to find a half Dragon woman stand before them who claimed that they had broken into the grave of her mother. After they spoke, the three brothers weary that the Half Dragon would slay them at the spot, it became apparent that the Half Dragon identified the Tenebris's father as her own, having met him several times throughout the years who would occasional visit her and her mother, she too until the brothers knew about their existence. For several years, Tenebris would occasional meet his half sister known as Serenia at the grave of their father out in the wilderness unlike his other two brothers who forever after resented their father and Serenia, but at each time Tenebris could see his sister slowly deteriorating becoming more and more of a Nightfury, and thus so did her apatite. Serenia would eventually become a full Dragon, and on several such meetings she would openly be feasting upon livestock she had stole from the farming hamlets what provided Draconis's agriculture, yet Tenebris said nothing, Serenia had become family to him and the two would often talk about their exploits into the long nights why recalling stories of their father. Then came the reports that a Dragon had become more and more aggressive outside the City's limits, and more than burnt livestock corpses began appearing after several disappearances of local farmers were reported. Tenebris's didn't state anything to his companions in the guard refusing to believe that it was Serenia, who denied it all, it was only when his two brothers who had departed on a route to sell their wares and were discovered missing apparently the same time a Nightfury was spotted in the region that Tenebris came to the conclusion that something had to be done.

That very same night, Tenebris rode to the lair of his half sister, they spoke at length about the disappearance of Tenebris's brothers, Serenia promising that not only was it not her but that she'd begin immediately searching the region herself upon the morn' for another of her Kin to find or avenge her half brothers. When Serenia turned to slumber Tenebris drew his blade from his scabbard, fighting back the emotional turmoil and tears he brought the blade down Serenia's throat, truly believing she was the culprit. He spent the rest of the night by her corpse, and to his surprise finding several eggs at there at of the Cave, he couldn't bring himself to smash the unborn young, thus rode back to Draconis. He recalled how he slew the beast who had plagued the local farming hamlets, and avenged his brothers, and a cadre of guardsmen alongside himself went to reclaim the body, there they found the corpse of Serenia, but the eggs were gone. While the attacks stopped for a period of time, the disappearances slowly reemerged, along with the missing livestock, and reports of a Nightfury, which resulted in the Viscount at the time sending a whole detachment of Guardsmen and Laurel Knights to scare the beast off. Tenebris felt regret, and knew it was no doubt Serenia's mate, but he forever wonders if Serenia was aware of her mate's hunting habits, it made sense after all that the male would hunt while the female protected the eggs. To this day the corpse of Serenia now remains as a trophy within the Citadel, and a constant reminder of Tenebris's guilt and shame, while others continue to this day to hail him Dragonslayer he carries the burden alone knowing the true title is kinslayer. A Deep part of Tenebris still wonders if Serena's mate would return, or perhaps even her young to take vengeance.

Abilities and Skills: His intelligence, His wit, his cunning, his charisma and charm.

Remember he's distant mind you and may not show the best of affections due to his work! xD
_________________
"The mighty praise their physical prowess and stature above all others, the quick-witted, their limitless and enduring minds, the charismatic, their leadership and persuasiveness. But true strength has and always will be -all- strengths".
"Draconis is a city unto itself, beholden to no one"

Recently added some Backstory.
_________________
"The mighty praise their physical prowess and stature above all others, the quick-witted, their limitless and enduring minds, the charismatic, their leadership and persuasiveness. But true strength has and always will be -all- strengths".
"Draconis is a city unto itself, beholden to no one"