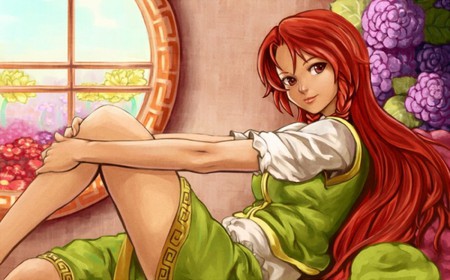 Personality:
Saphira does not scare easily. She was born and raised in a village that's constantly under attack by the natives, it is very hard to surprise her. Saphira doesn't like threats. Anything thing she thinks is a threat she will respond to with her own very serous threat. Other than that she gets along with others very well and is able to make friends easily. She has an easy going open minded personality.

History:
Born in Sklira Saphira was is an only child. Her father was killed in a native raid before she was born. Very quickly Saphira's mother began to notice her daughter had a special gift. The gift though soon became a curse. Whenever Saphira go upset things would start floating and flying across the room. It kept getting worse as she got older. It became too much when Saphira inadvertently almost killed her mother. To fix Saphira's curse her mother traveled to Dragconis and bought a special magic necklace to suppress Sahira's power. However the necklace costed the entire family fortune so they returned back to earn it all over again.

Her powers under control Saphira's life was near perfect when her mother was taken during one of the native raids. Having loss her family Saphira saw no need to stick around. She rented out her house and took off to travel the land and see find a new occupation that struck her fancy.

Abilities and Skills:
Really good at bartering.
Good with words and talking her way out of things.
Good with bow and arrow
Ok with a sword.

Saphira has very powerful Telekinesis abilitys and a large pool of magical energy for a human. She is not limited by how strong she is and the range at which she can manipulate an object is far greater than other Telekinesis wielders. Saphira is capable of manipulating more than just solids and can manipulate anything.

Saphira has a special yellow crystal that is held on a necklace to suppress her out of control abilitys.

Weaknesses:
Saphira is unable to control her power and it seems to grow more out of control the more emotional she gets.

Because of the necklace she wears she can only use her telekinesis to lift objects that she can lift physically.