The Cursed: City of Elves

The Cursed: City of Elves

Donalbain had intended to return to Iota; that was why he had been in Brysur. But while waiting in the port city for a boat that would take him there, Bain met a woman. She was the most beautiful he had ever seen, but that was not why he decided to stay in Megalo. This woman had never seen a cat before. It wasn't that strange, really, after all there were many things Bain had never heard of before... like the demon residing within him, currently. But something about it made him want to know more about this woman. Unfortunately, she vanished as quickly as she had appeared. For a week, Donalbain scoured Brysur, hoping to run into her again, with no such luck. Finally, he was prompted by the creature within to move on.

Wanting to stay a little longer, in hopes that maybe he might run into that woman, whose name he had never learned, Donalbain made an excuse. If anyone might know who to remove the curse that plagued the 120 year old Human, it was the Elves. Well, he had no idea if this was true or not, but the Elven people were very knowledgeable. So this meant traveling back to Iota would have to wait another couple of weeks. After gathering provisions, Bain left the port and started inland toward the city of Nero. Nero was one of the places Bain knew of, but had never been to. Perhaps that was because Elves didn't care much for Humans. What a wonderful idea, the demon within Donalbain thought to itself. Go somewhere you are likely to run into trouble. If it were up to Raiju, they would be in Iota by now, doing what he wanted. But as it were, Donalbain had control of his own body for now. Certainly, Raiju could take control whenever he pleased... but he wasn't entirely sure how. One would think, after 120 years, he'd have figured it out. But how he and Donalbain came to share the same body was something he'd done instinctually, because he had been so weak and in need of a host. Of course, he wasn't really sure why he needed one. All races have their secrets, he supposed. He just wished he'd learned his before he left home.

By early evening, Donalbain had made it to a small village that was just outside of Byrsur, about half a day's travel. The people there were welcoming and allowed him to stay for the night. Donalbain repaid their kindness by helping with chores the next morning before setting out again. From the village, he headed northwest. Nero was about fours days away, maybe more... he wished now that he had a map. But he could always make one along the way, help pass the time. The demon wasn't exactly talkative, he realized, and he wished the kitten that had followed him into the tavern at Brysur was still here, but it, too, had disappeared. Donalbain looked up at the sky. The sun wasn't up yet, not for another hour. The air was cool, almost a little bit more than Bain liked. But it was definitely better than the roasting heat that usually filled the air in this region. He followed the road until it was replaced by untouched wilderness, made a note of that in his journal, then stepped into the daunting forest ahead of him.

Here, his journey to Nero began.

Seraphim of the East... Perhaps thats what Ill see next. No, I don't think that one exists...
To be lost in thought is one thing but to be lost ib the wilderness is another. The man wanted to travel to the elven city Nero, however running into different creatures of the likes slowed him as well as hunting, but he did little resting as he pressed on.
Tidari, the wanderer as people callex him, was originally on his way to Nero until he heard about something called tge Seraphim of the East in which, in itself, was a simple trick or lie. Must press foward

Tidari pulled out an unfinished map, laying it on the grass as he marked tge nearby tiwn and the near roads. He had heard of enchanted weapons in the elven city, rumors, but if he started to collect them ajd got their background, if they had a background, perhaps hehe'd settle down at an old age and open a museum... That would be a fallback. If he didn't become a god like he planned in the future's or expand his race then Tidari thought that perhaps a museum, one with much knowledge abd wisdom could prove good to the public.

Tidari found tye road, finally, as he stepped upon it he noticed a figure in the distance, seeing it man. The man appeared to step into the forest, and with how lost Tidari was he must ask the man for directions. He took to a quickened pace, hoping to catch up to the man sooner rather than latet. 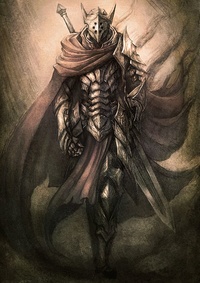 Donalbain had not quite left civilization--the roads--behind when he heard a voice. He turned around to see a man quite a ways off running toward him. One of the benefits of having this demon within him was enhanced hearing; otherwise, he would never have heard the man for how far away he was. Raiju allready didn't like the idea of continuing to wander around Megalo, but to take on a traveling companion? He was very much tempted to take control of Bain's body and chase the man off. Bain raised his right arm and waved to the man, waited for him to get closer before he called out, "Yes, what can I do for you?"

As Voltumna made his way to the man he stopped about fout feet from him, keeping sone space between the two, "Im looking for the city known as Nero, could you point me in the right direction please?"
If one noticed the long sword on Voltumnas back then they could also notice two more sheathed on his side. His arm tensed slightly, barely noticeable as a twitch somewhat, he was ready to block an attack if need be. Voltumna just wanted to get to the city, however perhaps a companion or traveling partner could do. He always traveled alone and this man looked like he could take care of himself however the ideal was swimming in Volts mind for a moment.
Voltumna has had a bad past with traveling partners, the first one, surprisingly a succibus, was decapitated by a snow troll. The second was a young mage who was impaled when he fell on a broken pike. This man could be, or may be not, his third partner, and Volt knew to be weary of the man if ye had anything up his sleeves.

Host and parasite watched as the man drew nearer, stopping a mere four feet from them. Donalbain sought to help his fellow man in need, so he didn't pick up on what Raiju did. This stranger took a defensive stance. Did he really expect an attack? Perhaps I ought naught disappoint him.. the gari-wolf thought. After all, the man was asking for it. "Actually, I'm going to Nero, too." Donalbain said with a smile to the stranger. "We might travel together if that's alright with you.. Unless you are in a hurry?" The long-lived man looked at the other across from him, making note of the weapons he carried. Was he a hunter, or maybe some kind of mercenary?

Voltumna smiled back appreciatively, the tension in his arms fading as he relaxed his shoulders. He still needed to be cautious though as trusting strangers tended ti be the end of most people these days. The man walked up to the stranger and extended his hand for a proper greeting, "My name is Voltumna, forgive any hostility... Im just jumpy when meeting folk."
Under the hood his pale face qas visible, his dim green glowing eyes looking down at the man he stood in front of. O

Bain smiled and shook the man's hand. "Nice to meet you, Voltumna. I'm Donalbain. You know, it's not a good idea to be hostile to someone when you're the one who approached them. But I understand." Raiju had been hoping for the opportunity to fight, stretch his legs. But then again, that would have wasted time. "So what business do you have in Nero, if you don't mind me asking?" As what sometimes happened, Bain sudddenly got a sense of urgency. He turned around and continued on into the thick woods as he made conversation with his new aquaintance.

Making his way alongside Donalbain the pale man replied, "Looking for a magic, shock magic to be exact. Ive been aiming to expanding my spell count in hopes of... Achieving a more "powerful" form of offense rather tgan rely on my swordblade."
True intentions are always kept hidden, the fact that most people take the word of a stranger is quite interesting. Trust can only go a long way, the chances of lightening magic in Nero was not very likely and rumors of such hadn't grown around the lands.
Truth be told, the pale man didn't know what he was looking for, the chance to become more dangerous and attract attention or to see tge world and die an old age, or, if possible achieve godhood and revive what was long lost. It was clear Voltumna wasn't human, while he blended in more as a vampire those creatures don't walk in the sun.

"Shock magic, you say? I hope you find it. I prefer a blade, myself. Much more reliable." Bain stopped once or twice to look around, to make sure they were going in the right direction. In such a thick forest, it would be easy to get lost, especially without the sky to guide the way. "I've got plenty of provisions. We'll stop just before sunset if that's alright with you."

"Only if you need to," Voltumna replied, following closely behind Donalbain. He kwpt his guard up in case of ambush from raiders or a feral beast, however it mattered not to the pale man as he easily handled any situation its just he needed it not. As they ventured in the forest Voltumna spotted a deer a nice distance away, unaware the pair were walking, "Ill go hunting, I shall be back."
And like the pale man silently took off, readying his sword. As he approached tge deer noticed the slightest noises of crunching twigs which set alarm. The pale man noticed this and threw a rock at the tree next to the animal, and as thought, the animal took off faster than hells arms. Voltumna traveled at good speed keeping a distance between him ajd the deer. As there was a brief clearing he threw he katana at the legs, successfully cutting them to render tje animals limbs useless. He wasted no time in finishing it off, then heaved it over his shoulders with the bloody blade in hus mouth. If Voltumna had a bow it'd be a cleaner ordeal.

Making way back to Bain, as he would call the man now, Voltumba would return and retrace his steps with ease, eventually finding the man.