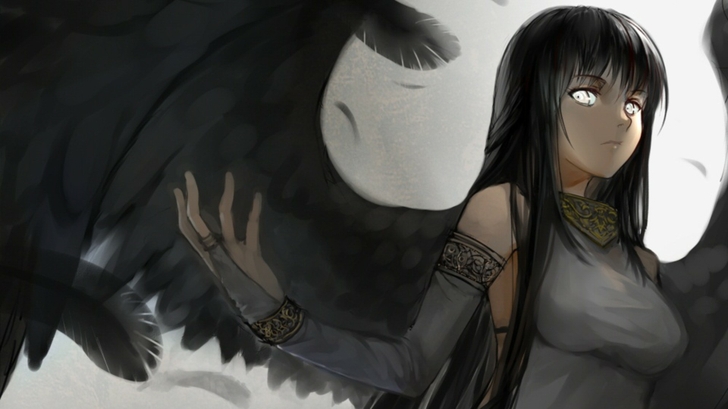 5 feet and 3 inches tall. Selene is much lighter than you might expect weighing in at only 80lb. She is light so she can fly. She has large black wings which have a wingspan of 7 feet. Long, soft, and black silky hair run down to just a bit beyond her hips. Her eyes are an almost glowing white with small black pupils that seem to pierce the soul, it very difficult but if you can look past that you might catch a glimpse of the sadness the eyes hold. She has a small and curvy frame sporting  a D bust. She wears grey clothing with a ring atop her hips and either end of her arm sleeves. The rings are black runes of her old order. Being of Angel heritage Selene is blessed with beauty humans could never rival. Even her voice is considered the prettiest there is. Those eyes though they ruin it all. Fallen angel sums her up perfectly both in appearance and in personality.


Personalty:
Selene lives a simple life though her intentions are nearly impossible to read. Nobody knows or could understand what she seeks. Just as she didn't fully understand either till she had the curse herself. She is alone before now, now, and every moment after now.

Now days she spends her time pleasing her senses. Food, amusement, sweet smells everything but sexual matters. It pains her reminds her of the good old days when her family was still her around. When her husband was young and handsome and her children where all adorable, which is the worst pain in the world. She never uses her powers as she has no need for them. The only excepting is the occasionally group of people who think it would be a good idea to capture a fallen angel. She usually forces those people into giving her a bit a of an amusing performance before killing them.

Despite her enjoyment in pleasing herself Selene always speaks in a monotone voice like she isn't actually enjoying it. She seems to be completely devoid of emotion and that's exactly what she wants to be. The only exception to this is when she is drunk and she is drunk a lot. She has grown very fond of alcohol. The alcohol sometimes backfires on its intended purpose. First she starts letting out some emotion then something reminds her of the past and she just breaks down from there.

Despite her wish for death and general cold nature, she sometimes helps people in need. She has a never ending war going on within her a cold side which wished only to find a way to die and a kind side that still cares for the people of the world. The cold side is normally the dominate one however those who look will see the kind side.

History:
Born to an Angel mother and a Human father Selene was named after the moon. Her hair and wings were black but her eyes where a shinning white. Her mother though saw the huge mistake they had made. Having human heritage Selene would not be allowed in their heaven but having angel heritage she would be immortal. It was a curse really trapped on the world below to watch all she knows eventually die. Her mother sealed Selene's Angel heritage away leaving nothing but a mortal human free of the curse she'd been born with, the baby's eye changed from a shinning white to a deep blue. The mother and father then separated. Obviously Selene lived with her father. The mother was punished for he deeds and was never allowed to see her lover or daughter ever again.

Selene's father was a king giving Selene a bit of a spoiled childhood. They had many servants and were more like family than servants. This utopia was not to last though as their country was on the losing side of a war. Selene woke up one day to her father rushing into her room alongside with Bart of the male servants. They grabbed Selene and rushed out of the room where solders were waiting. Behind the solders lay the dead and bloody bodies of servants of the family. Her father stayed behind to slow the guards while Bart rushed her out. He died trying buy the two time. Bart had been wounded in the escape. They managed to get out of the country but Bart didn't make it beyond that. In one fell swoop all she had ever known was taken from her.

Selene lived on the streets of a big city an orphan accepting peoples charity to scrape a living. So quickly fate had taken away her position as a princess and made her a street orphan. Or unfortunate situation didn't last long though. Quickly an organization that valued beauty found her and easily saw her bodily gift. She was absorbed into the organization that used the beauty of their members for seduction and other political matters. Causing wars and increasing their own power in the world. The organization was led by a fallen angels or at least that what people thought the leader was. Really they were half angels. Selene wasn't the only one in the world with sealed angel heritage. The organization was created by one of these half breeds who hadn't had their heritage sealed away. They found a power that let them full fill their wish of dying. The power was only usable by angels and was complete manipulation. It could be passed on to sealed angels but the original user would die as a result. The one who inherits this power would have their angel heritage unseal making them immortal. Thus a never ending cycle started of these half angels tricking others into accepting this curse.

Selene was 22 when the curse was passed on to her. She had been called to a secret meeting where the leader would chose to give one member a special power which would allow them to become one of the best in the organization able to manipulate anyone with ease. People came up one after another their angel leader screening each one. None of them were worthy but Selene didn't understand how. What was their leader searching for? Then it was Selene's turn and she was chosen. She didn't know why but for some reason she was worthy. She was also very happy about this. The organization saved her life and she had a very high position in it given how nature favored her blessing her with a body everyone man and women envied. She wanted to help the organization in anyway she could and now she had been chosen to practically be the second in command. Selene was led into a dark room where only her and the leader was allowed. It was suppose to be where Selene was given the power but its also where she learned it was a curse. Next thing Selene knew the previous leader lay dead at her feat. Black wings has sprouted from her back. She also felt she had gotten much lighter yet at the same time a bit stronger. After looking in a mirror she found her eyes were white and almost seemed to glow. She vowed then and there to end the cycle. To bear the burden on her own and never pass it on to some unfortunate soul. Being the new leader Selene disbanded the organization.

As time went by she ended up falling in love with a handsome young man. They adopted children and lived a happy life. However time rolled by and Selene didn't age a day. She was forced to watch as time took away her husband. After that she was forced to watch her children die next. Some died from illness others were murdered and a couple lived long enough to die of old age. In all cases Selene could do a thing to stop any of it. She understood now why all those before her wanted to die. The agony of living was unbearable. Breaking her vow Selene sought to revive the organization. However everyone she new from the old days were dead. She had out lived them all. She out lived the organization itself. Selene now spends her days searching for a replacement. Someone to take her spot and to finally end her own existence. Sometimes mortals for whatever reason decide it would be a good idea to capture a fallen angel but to do that they have to physically touch her to subdue her and so as they do their fate is assured.

Magic/Abllities:
Immortality
Accelerated healing the more she is injured the faster she heals.
Super Human Agility
Slightly above average strength.

Selene has the amazing ability to gain complete control over whoever or whatever she touches. Reading their mind, altering memories, emotions, or even instantaneously killing them by destroying their psyche. With intense concentration she can extend this power to a single target at a distance. Selene is also completely immune to the mental powers of others including attempt to use mental blocks to guard themselves.

Weaknesses:
Though she has above average strength she is physically small and light. Unless she is anchored her enhanced strength does nothing for her. Its mostly just there for the agility it gives her.

Though she is immortal she still feels pain the same as mortals do. Her wings are especially sensitive.

If someone she trusts touches her while she is using her mental powers all her memories will be involuntary dumped into that person along with the emotions associated with those memories.

Re: Selene, the fallen angel