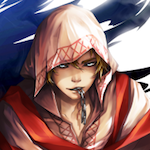 Appearance: Alexander's current appearance is disheveled at a glance. His long hair reaches the base of his neck, and travels around his face at equal length. He usually keeps his hair back in a small ponytail so that his bangs don't cover his face. He has striking eyes, each a different color due to his heterochromia. The right eye is gray, the normal coloration of his eyes. His left eye however is a wicked Neon-Blue, to the point that it glows dimly in dark places.

His face is average-sized, his expression fair. His nose is sharp and his jawline strong, with a gentle chin and thin lips. He has very pale skin from being trapped in Tartarus for so long, though his body despite starvation has not physically deteriorated. He is very svelte and well toned, though he bears many scars on his body from his training in Icarus (it was positively brutal in the later years). He stands at an impressive 6'1", which is tall enough to stand above most of his peers.

Age: Alexander is between twenty-four and twenty-five years of age.

Personality: Alexander is jaded and distrustful, though he does his best to overcome these traits. Secretly cynical and outwardly positive, Alexander always makes an attempt to stoke hope in others because he understands how powerful a feeling this emotion really is, and believes without it humans have nothing. As a result, he is prone to episodes of immense pity towards those who feel hopeless and as though they have lost everything- he relates to them more than he can express.

He has developed an inferiority complex, which manifests as his seemingly good nature. Alexander believes himself to be the lesser party of humanity, viewing them as pure (if somewhat ignorant) creatures. If he takes a liking to a person, he becomes fiercely loyal towards them. If these people are injured, hurt, or otherwise threatened... read on.

Alexander is also arbitrarily kind. He lends a hand whenever he had one to spare, and holds politeness in high regard, speaking formally to friends and strangers alike. He also hates killing, actively intervening in actions that would result in fatality for either party. While he hates killing, he is not above it.

However, as a Dissident he's prone to episodes of aggression, and in the heat of the moment can become impulsive. Sometimes this impulse gives way to outright mania and he goes on a directed spree of violence. He can halt this episode, but only once it has either been going on for a few minutes or it is otherwise halted. This is at least somewhat due to his constant repression: Alexander is constantly tortured by his own failures, hiding his agony behind a smile. He rarely speaks of events in his past, trying his best to move forward.

The doesn't mean Alexander is soft. He is quite capable of dealing with tragedy, and will often plainly express reality to people who start to behave beyond mere irrationality to the point where they begin endangering themselves. He is unafraid of Death, knowing full well that even if he ceases to exist so too will his torment.

Beyond that, Alexander has a sadistic streak that he is repressing with great tenacity. When individuals manage to incur his ire sufficiently, he does not kill them quickly. They die slowly and violently. By no means is this man a good guy- he is just a monster that desperately wants to be a man.

Habits/Quirks: Alexander really enjoys drinking tea. On the surface this seems like a habit, in actuality its a soothing repetition of a former habit that helps placate his new, violent tendencies when he is idle. He also enjoys reading and cooking for similar reasons.

Likes: A handful of people and a peaceful existence.

Item: Clarent: Alexander is not prone to carrying items, and instead wields a single sword forged in the depths of the Void of Existence called Clarent. Said to be inhabited by a demon, Clarent starved to death when it could not feed on Alexander's non-existent soul. Alexander was left with an ultra-dense and ultra-sharp blade forged within the Absence of Reality, said to be able to cleave through almost anything and of a material so alien and dense that few things can break it. Clarent will likely never lose its edge.

Dissident Arm: Alexander's left arm is covered in an exoskeleton consisting of an iron-chitin composite. It is extremely durable, and totally organic.

Dissident Eye: Alexander's left, glowing eye is capable of scanning items and creatures for weaknesses. This can be used to find abnormalities in healthy beings (tumors, parasites, bacteria clusters) or locate weakness in items (armors, weapons) and living beings.

Hazard: Alexander's Dissident Biology makes him toxic to most beings. From his blood to his flesh, right down to his spit and breath he can cause toxic shock in most creatures to the point of a lethal outcome. This also grants him an extraordinary level of poison resistance. Only the most lethal poisons will affect him, and their effects will be harshly dampened.

Restoration: Alexander is capable of severe and quick regeneration. Severe gashes are almost instantly repaired, while severed limbs are regrown within a few hours.

Soulless: Alexander lacks a soul. However, as a Dissident he can sense souls and their location with startling accuracy to within a few miles. He can deaden this sense in crowded areas to avoid being overwhelmed.

Deathless: Alexander is not able to experience the afterlife once his physical body is terminated. However, he can not be turned undead. In fact, placing an undead curse on Alexander will revive him if he had been killed for good, and also empower him further, causing his abilities to escalate.

Swordplay: Alexander is extremely adept at sword play, and wields his blade Clarent with extreme ease and skill.

Icarian Pankration: Icarus was raised into the sky centuries before many martial arts were created. While the explorers of Icarus observed many new styles on their excursions to the surface, they lacked the expertise to transport all of these moves back. Alexander's main fighting style was the ancient art of Pankration, fine-tuned over the various centuries by his predecessors. It consists of strikes, kicks, throws, take-downs, chokes, and locks. Its an extremely brutal physical style, with the only techniques disallowed from use being biting, scratching, and gouging. In particular, taken from another Greek tradition were the means by which he was trained. The objective of tournament fights was to beat your opponent as severly as possible without killing them. Alexander has won and lost his share of matches, gaining incredible pain tolerance as well as great skill in inducing unconsciousness. Pankration is an all-encompassing martial art. From childhood, Alexander has spent hours a day mastering its execution until the Day the Sky Fell.

Skyborn: Alexander was raised in conditions that prepared his body for a life of biting cold and little oxygen. While merely athletic by Icarian standards, at sea level he is almost an Olympian in terms of strength and endurance (baseline).

Siphon: Alexander is weakened in the presence of positive emotions. This affects all his Dissident abilities (except for the bones). His eye starts to become unable to read weaknesses and its characteristic glow dims. His healing factor slows to crawl. The poisons in his body are neutralized, and in turn he becomes susceptible to being poisoned or falling ill. His ability to sense souls is suppressed and only becomes effective in the immediate fifty feet.

Starvation: Alexander is not just empowered by Negative Emotions, but feeds off of them. Without its constant presence, Alexander will begin to starve. This will never kill him, but it has the same effect on his body as the above.
Through the Heart: the only true way to kill Alexander so that his healing factor doesn't revive him is by destroying his heart, where the curse resides.

Silver and Gold: Alexander's body is adversely affected by precious metals. The degree and type of the effect depends on the metal in question.

Mental Torment: Alexander's unstable Dissident mind is prone to affliction by outside forces that affect the cognitive processes directly. That said, he can repel them with painful results if he isn't distracted.

History: Do you want to hear a story of loss, pain, betrayal, Armageddon, hope crushed almost as soon as it is introduced, torture, and borderline relentless disaster brought against one person? No you don't.

All you need to know is this: Alexander's history is long and bad, and he is the only one of his wretched species left.

|I am my own martyr etched into history, flash your hues and I'll make my move, I'll show you the nightmare you've spurned: my friend, everything will have to burn|

Similar topics
» Ganja king's
» FS, King Grayskull light up Orb column (custom)
» King Grayskull for sale.
» King's Out
» What do you think about the King's Gambit?