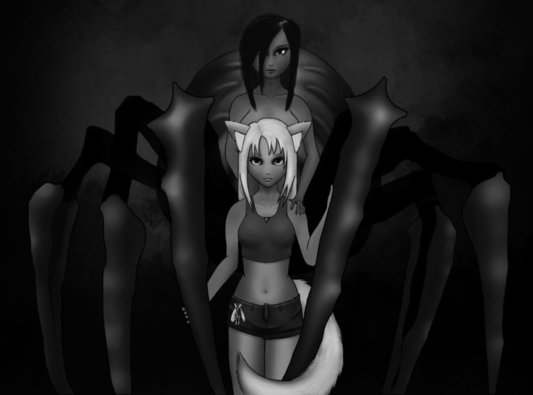 Credit to Deviant Art's Serabot. The wolf girl in the picture is Serabot and not my character. It is the spider girl Archne that this character sheet is refering to.

In her normal posture Archne stands 6 feet tall. She is 7 feet wide including the legs and 4 feet long from her abdomen to her torso. She weighs half a ton. She covers her large bust with a sports bra made out of her own web and dyed black.

Personalty:
Archne is actually a very caring and kind Drider. If she wasn't born a carnivorous predator she'd be the sweet girl that everybody liked. Unfortunately she only got that kind of reputation with her own kind and now that all of her own kind seem to have gone extinct the only reputation she has is a blood thirsty monster looking to kill and eat all in its path. She had resorted to eating humans but that was just to stay alive.

Archne greatly distrusts humans and even though she is kind she is a predator and has nothing against killing and maybe even eating a human that gets too close. She especially doesn't like her personal space being violated.

Other than that Archne is very naive. She knows nothing of anything outside her dying forest.

History:
Raised in a secluded forest with her numerous brothers and sister most of her siblings died off at in the first 3 years of her life leaving her as one of the few lucky survivors. Her parents raised her and her remaining siblings for 5 more years before abandoning them. Beside survival one of the most important thing they taught them was to hate humans and rightly so. Not only do humans view them as monsters that should be killed on sight but are also highly valued for their web which if stronger than any metal in the world as well as very lightweight.

One day a gang of stupid criminals looking to for a get rich quick scheme found Archne's cave while she was sleeping. The men and some women threw themselves into the cave using each other as human bridges to get across the sticky web that lined ever area of the cave. Finally finding the Drider they used the groups magician to capture her with magic. Instead of killing her then and there and taking the web inside her, Archne's captors decided to keep her alive so they could keep harvesting her web and stay rich forever. It made no difference to them that her human part looked to be only 10 years old and indeed accurately portrayed her age.

Contrary to popular belief Driders like humans are very social creatures leaving the only person for Archne to talk to was the preteen boy who came to feed her every week. She looked forward to his visits very much and hated it when he had to leave. Like wise the boy had come to enjoy the Drider's company. Eventually risking his own skin he allowed Archne to escape. Only after returning to her forest did she realize she didn't even find out his name.

The years went by on her forest was getting smaller and smaller. Her kind was dying off left and right from the lack of food. It had been two year since she's seen any of her own kind and with the lack of food she's resorted to going to the nearby village to hunt humans as a last resort to keep from starving.

Strengths:
Archne is far bigger than humans are and as such needs larger organs to keep her alive which don't all fit in her human torso. Most of her organs are stored safely inside her armored abdomen.

All but Archne's torso is covered in a thick and very strong exoskeleton. Normal iron weapons of any sort can't pierce it.

Archne's 2 venom sacks and web making organs are stored in her torso. One venom paralyze her prey near instantly and is delivered through a retractable stinger in her abdomen. The other liquifys the inside of her prey for easy consumption. Her webbing is excreted out of her mouth and she can use her hands to fashion complicated creations and her legs to simply attach strands. She has many different types of webbing she can produce.

Archne is very fast and strong. She can run as fast as a cheetah, jump super high, and easily take down a dire grizzly bear. She can also climb up almost any surface.

Archne can go comfortably a full week without food and 3 months before starving to death. Same with water.

Weaknesses:
Archne has no affinity for magic.

Archne's torso is fleshy like a human and very susceptible to weapons.