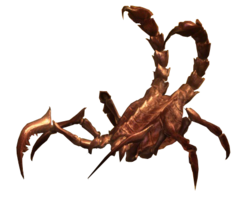 Scorpions. They have become significantly larger, as they were in prehistoric times. Some are the size of small dogs, while others are as big as 12-year-old Human children. They have evolved to have two tails. One produces a venom that is very potent, able to kill in a few seconds or a few minutes, depending on the size of the victim. The second tail produces a toxin, usually used in defense, which will cause the victim to fall asleep for a few hours. Their stingers are able to penetrate most materials. Whereas they could only be seen at night under ultraviolet light, perhaps for mating purposes, Dromopoda are now bio-luminescent and can be seen at night with the naked eye. And since most species are nocturnal, this makes it easier for larger predators and potential prey (smarter prey) to detect them. Due to their larger sizes, their dens are above-ground, some having taken up residence in the abandoned Human cities. Their exoskeletons make killing them difficult. However, assuming one can avoid a Dromopoda's pincers and tails long enough, they can attack their underside.