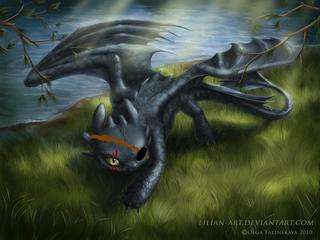 Vesper has three scars going down his right eye, which he received from a dog when he was barely a year old. An eye patch covers his left eye. He can't remember what happened.

Personality: Vesper tends to keep to himself and prefers to be alone, even though he doesn't like it. He hasn't come across another of his species, not even a half-breed, since he was 8. He generally avoids Humans, though when he was younger he liked to play with them, sometimes carrying them around on his back. Vesper mostly eats fish, but will occasionally hunt small animals. At night he searches for others of his species.

History: The first seven years of Vesper's life was relatively quiet and happy. Though his parents often told him to be wary of Humans, Vesper often visited the village he lived near and played with the Human children. Though as he got older, the adults chased him away. When he was 8 years old, Vesper got into an argument with his parents and ran away. He's been on his own ever since. His parents are most likely dead. When he was 13, Vesper met a Human female of the same age named Anna. The two became friends and Anna taught him the common language, while he taught her the dragon language. One day Anna got into a fight with her father and left to see Vesper. But she was unaware that her father followed her. Anna tried to explain that she and Vesper were friends, but this only made things worse, as her father preceded to attack Vesper. He ran but intended to return the next day to say goodbye. He found her in there usually meeting place... along with her father and several other people from her village. At first, Vesper felt betrayed, until he realized that Anna had been used as bait to lure him back. Out of fear of accidentally hurting Anna, and because the number of Humans overwhelmed him, Vesper didn't fight back. But he didn't run either because he wanted Anna to go with him. He doesn't remember what happened shortly after arriving; when he awoke, it was nighttime. He discovered that he was wearing an eye patch over his eye. It wasn't until the next night--as he spent the whole day sleeping--that he had lost the eye. Though he doesn't blame Anna for what happened, he left the area and no longer trusts Humans.

Abilities and Skills: Vesper has a variety of abilities specific to his species, such as being virtually invisible at night due to his dark scales.

He can use echolocation, which is particularly helpful given he only has one eye.


Weaknesses: He would be unable to fly if his tail fins were damaged or he lost one.

He is stubborn and won't run away from a fight even if the odds are against him. He also won't fight if a friend is involved and could possibly be hurt.

Lacking his left eye, Vesper could be caught off guard if approached from the left.

You read my Astral characters page right. I kinda jumped on Night Furys right away. I should prolly make a sub race for them.

Also your dragon could easily heal its eye back into existence and the scars. Like as easily as it is to blink an eye.

I find it hilarious that's almost the exact same pic I used for my DRF NightFury http://rpgdragons.forumotion.com/t136-astral-goddess-of-the-moon-and-stars

Edit: OMG its gone the pic has be obliterated from the internet. See this is why I save ever pic I like on my computer. *goes to find where she saved it* found it and reuploaded it. this is actually going to be my pic for when this Astral is taken over by the DNA which isn't far off.
_________________
The Man Stealer

Well, it's just easier for me to do that.

And I know he could, but I wanted him to be... well, different.

Almost the exact same pic? XD It's exactly the same, except for the eye patch and scars.

So the only difference in our appearance would be my scars and missing eye.

True, true--prettier? Pffft! You wish you had my good looks.