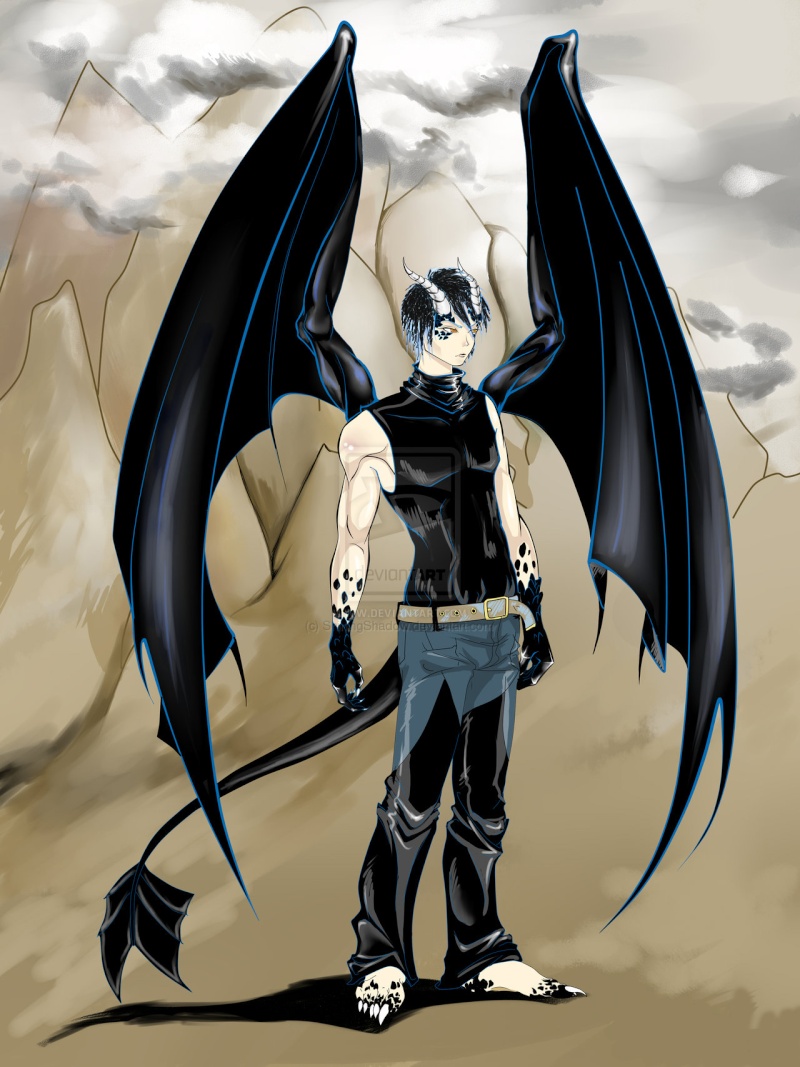 5ft 10' , mostly covered in black scales with a tint of light blue, Wearing damaged clothing torn from his own growth as his dragon side is taking over.

Personality: From being on outcast Eclipse has had to look after himself from the age of 13, using his strengths from his dragon side he was successful at hunting and living off the land. Mostly living off meat whether its fish or wild animals. Therefore he is quite shy, but has a hate for humans for treating him the way they did. He has a playful side but due to his time being alone he never really had time to play, making him quiet keeping his true personality in a 'shell'. Eclipse is friendly and only wishes for peace and acceptance for what and who he is.

Habits/Quirks: Has always liked drawing, the night sky especially the stars, making use of his wings and tail making him feel unique.

Dislikes: Hostility, Humans, Being to cold


History:
Eclipse has a sad history, his father was a dragon while his mother was a human. His father was quite old ranging from 100-150 years old who found his mother lost in the woods below his mountains. He never did enjoy hurting defenseless beings, but upon finding Eclipse's mother he was stunned by her appearance. Clearly his mother was terrified at first, in till building a relationship with the dragon. She found out that dragon's weren't beasts, after the many lies that she was told when she was little. After many months of seeing each other, the inevitable happened after the town finding out that she was seeing a 'beast' they attacked the dragon sadly resulting in many deaths including his fathers.

Meanwhile his mother was pregnant, many other towns folk deemed it to be a sign from a religious being
from which she gave birth to Eclipse, a normal human baby without any signs of dragon in him apart from his eyes, which shun a bright orange. After many years life was easy for Eclipse he was a normal human boy in till he came of age, which started the changes. His mother was shocked from these changes and it wasn't long before the town found out. Leading to his capture and treated like an animal in a cage, in till one night which his mother and family friends helped him escape, his last memory of his mother was running around from her as the town guard stormed the place. He never knew what happened to her only that he knew the true about dragons and humans, leading to his hatred.

After many years had past he learnt how to survive off the land, being alone with no one to look after him. His social skills lacked becoming shy and quiet, As the changes increased over the years he now had wings and a tail like his father, no doubt eventually the dragon DNA would take over resulting in him being like his father.

-> Being able to fly
-> Able to hold his breath longer than humans, (Around 5 minutes)
-> Scales giving him a thicker skin, weapons have a harder time penetrating through.
-> Able to eat all kinds of meat, whether cooked or not.
-> Being able to speak both dragon and common
-> Enhancements from sight, hearing and smell have been improved due to his dragon improvements.
->  Increased strength due to muscles like a dragon.

-> Freezing Temperatures
-> Wings and stomach are the most vulnerable parts
-> Effective tools increasing sounds and smells could distract him.