Appearance: She is a tall, skinny, anorexic figure who can change from Dragon to Human, although she frequently gets stuck between the two Formes, slowly eating her mental health and sanity.

When she is in Human Forme, her arms have large wavy purple stripes which give her most of her power. Near the shoulders, the pattern stops, although other traces of Flux can be found in her body, like in her eyes, strands of her hair and controlling her brain. She has jet-black hair and pale brown skin. Half of her face is covered in a purple pattern similar to the ones on her arms. There are purple streaks in her hair dues to Flux.

When in Fusion Forme, she has both Human and Draconic features. She has blades on her arms similar to a shark's fin, retractable glowing claws, also fused with flux. Her eyes are pure glowing amethyst coloured fires and a crazed grin on her face. Half of her skin is covered in midnight-black scales (which some are infused with flux) and the same pattern of flux. Her tail is strong and spiked in descending order of size.  At the tip of her tail, she has a tail similar to a shark and can wipe out anything in a few blows. Her wings are purple and black; strong and powerful.Thin ribbon-like lightning bolts trail from her fins, tail-tip and wings.

In Dragon Forme, she has an impenetrable shield protecting her emotions and a never fading growl. Her tip of her tail is a forked flat plate. From the base of the tip to quarter-ways down the tail, vivid purple spikes descend down to little sharp stumps which she can use to pierce the tougher of scales. She needs no weapons; her claws are retractable meaning she can extend them to even three feet long. Also, she has curved blades near her claws. Spikes are on the opposite sides. Armour is meaningless; her scales are tough enough. She has ribbon-like lightning bolts trailing from her forked tail, horns, arm blades, and the tip of her wings.

Personality: Dawn is an anorexic, mentally insane teenager. Although Flux is her main source of power, it can override her memories and control her body. When angered, Flux takes over her body and lashes out at the nearest person who angered her. She can't control her mind and sometimes she even kills her friends and loved ones. No one can understand her emotions and she never shows her feelings. She hates everything and everyone, her friends, her family and her enemies. She was driven to insanity by Flux and can never gain self-control again.

History: She was captured by fearing Megalos. She escaped by murdering an entire city and half of another. Flux has controlled her ever since the Megalos captured her. For years, she's been building her Flux supply until she had enough to ravage entire cities. After that, she relied solely on Flux, helping her through battles. One day, though, she had one too many Flux episodes. She snapped. She lost control.

Abilities and Skills: She can manipulate Lightning, minds and can teleport at will, although those are the ones who drain her Flux supplies the most. Of course, she can also turn into a dragon, although she frequently gets stuck between Formes.

Weaknesses: Ice, anger and fear are her main enemies. Flux can and will eventually kill her. 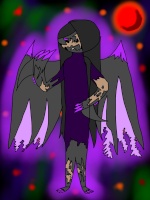