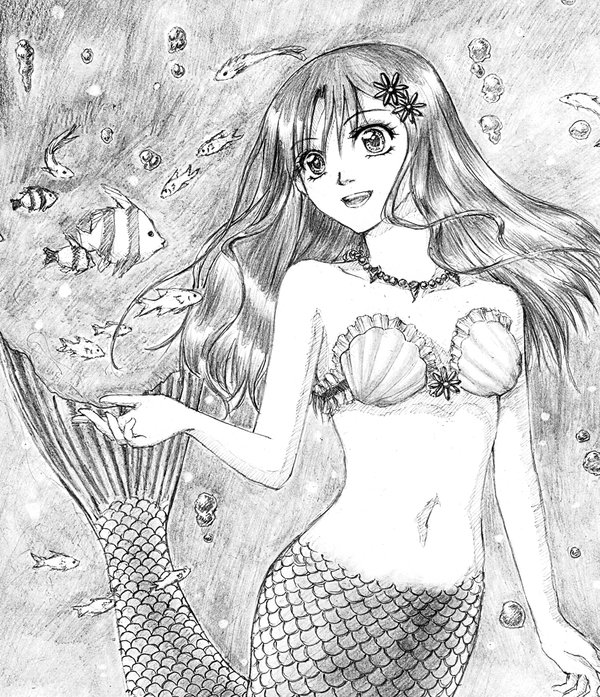 Personality:
Pearl has a very cheery optimistic personality and is general a thrill seeker.(I'm lazy okay)

History:
Parents are alive has lived a normal life so far(again lazy)

Pearl's life turned for the worst. Some gang lord found out about Pearl's ability to read minds. Mental magic in itself was a rare gift but Pearls specific gift was especially useful. The ability to know what someone is thinking had a great many uses. Said gang leader her wanted to capture her and use her for his own purposes. Unluckily for them one lucky curiosity mind reading revealed their plan to her. Her parents advised her to go into hiding in the one place they would never look, on land. Of course this was an obvious place to escape to but there wasn't much the gang could do about it. The land was all unexplored to them and being out of the water was uncomfortable.

Exploring the coast till coming across a coastal village Pearl exited the water and walked onto land with her new legs or at least she tried to. It was the pain in the ass to get use to walking and on top of that she felt incredibly sea sick or rather land sick. Pearl could see why her kind very rarely ever poked their head out of the water and onto land it freaking sucked! Even though hardly anyone ever did it let alone more than once, Pearl couldn't believe anyone would do it at all. She'd only been on the awful dry land for about an hour and already she was beginning to think getting capture by the gang after her would be better. She couldn't do that to her parents though.

Magic:
Pearl was born with telepathic mental magic. If she can see someone and focuses on them she can read their every thought. This puts a great strain on Pearl though. She can't do it for very long or very frequently. On top of this Pearl could only read current thoughts. She couldn't delve into someones mind and retrieve memories or anything like that.
_________________
The Man Stealer